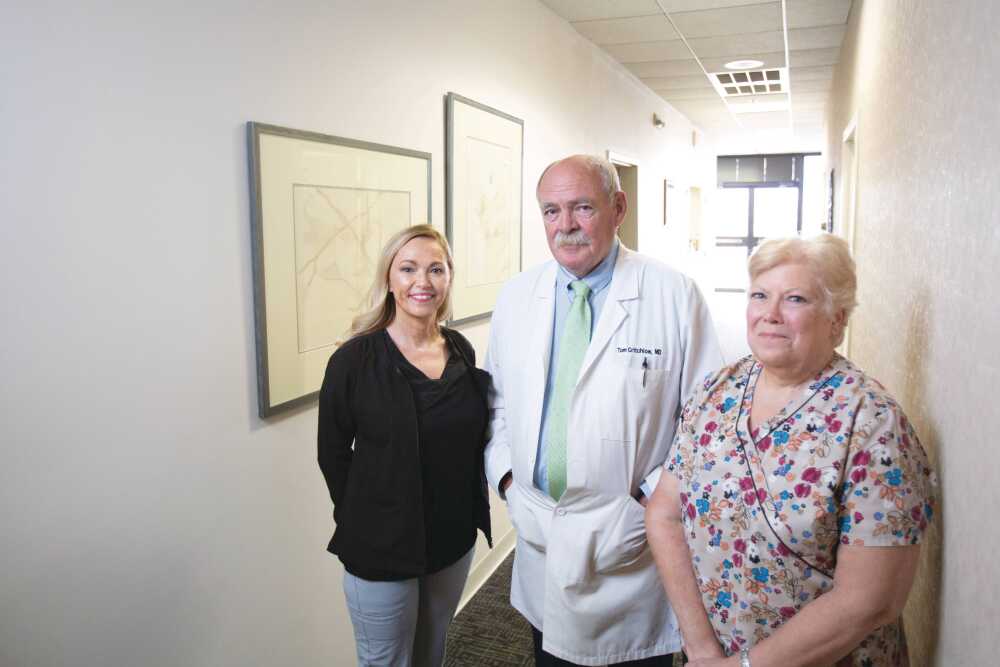 Johnnie Jones loves to garden  he grows cucumbers, squash, tomatoes, onions and an assortment of other vegetables. When he began to experience swelling on the top of his foot following a blood clot, Mr. Jones says he experienced discomfort and pain while doing the things he loved.

The swelling in his foot was so extreme, Mr. Jones needed to wear a full size larger on one shoe. His physician recommended consulting Dr. Tom Critchlow, M.D., at the Vein and Esthetic Centre in Cape Girardeau, a recommendation Jones now says he wishes had happened years earlier.

[Dr. Critchlow] is a godsend to me, Mr. Jones says. I would recommend him to anyone.

Immediately following the surgery, which included laser closure of a vein on the back of his calf, Mr. Jones says he was able to continue enjoying gardening with no downtime, swelling or pain.

He calls the experience at the Vein & Esthetic Centre unreal.

Thats exactly what Dr. Critchlow finds so rewarding about treating veins; so much can now be done non-invasively and as an outpatient; it wasnt always that way. Dr. Critchlow has practiced vein care since the late 70s and has seen the treatment of symptomatic varicose veins evolve from the old vein stripping operation, which required hospitalization and general anesthesia and days of immobility, to a situation where a patient now walks into the office, has his or her veins treated and walks out to resume their normal acitivities.

It makes people happy, Dr. Critchlow says. In general surgery, you treat people to stop them from getting worse  removing cancers, treating traumas, etc. In treating veins, you are actually improving peoples lives. That appeals to me. 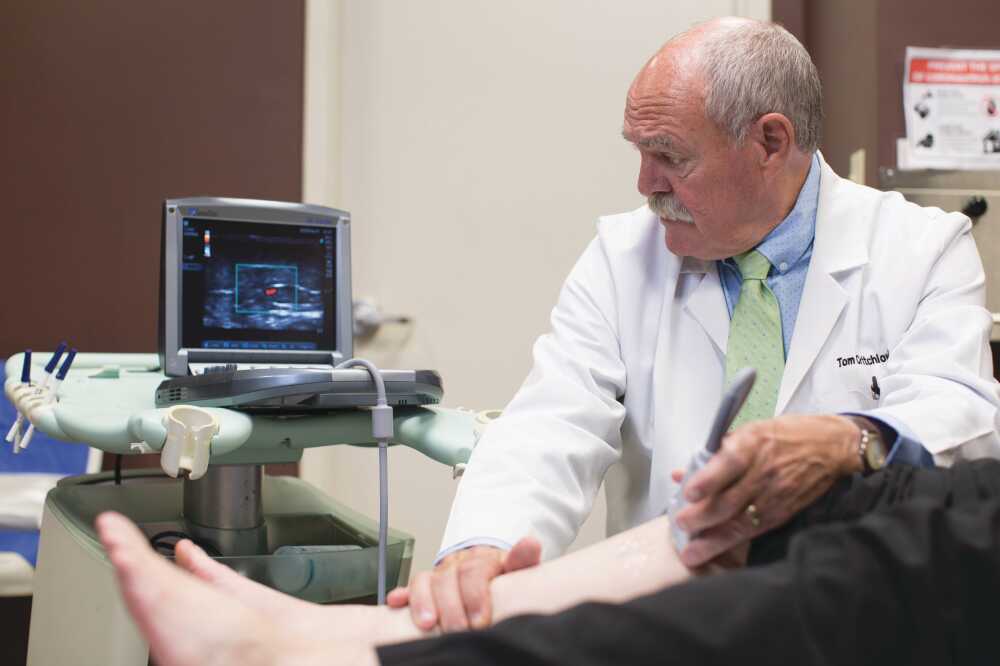 After graduation from the University of Missouri Medical School, Dr. Critchlow spent five additional years training to become a General and Vascular surgeon. In 1984, he read a medical article about new innovative techniques to treat venous diseases, written by Dr. Larry Tretbar from Kansas City. He called Dr. Tretbar and was invited to come spend some time there and learn these techniques, where he says his eyes were opened to a different kind of vein care.

Dr. Critchlow performed his first sclerotherapy vein injection in 1984 and says he has loved the field of phlebology  the treatment of veins  ever since. In 1998, he founded the Vein & Esthetic Centre. In 2008, he was named A Diplomat of the American College of Phlebology.

In addition to treating medical and cosmetic concerns regarding vein care, Dr. Critchlow also offers esthetic procedures. At his Cape Girardeau office, he utilizes both Botox and injectable filler  either together or separate  to reach the clients anti-aging vision. He has performed the injections since 1999, according to the centers website.

Botox injections paralyze muscles in a select area of the body, such as between the eyes or on the neck, to erase the appearance of wrinkles, Dr. Critchlow says. In contrast, injectable dermal fillers introduce a filler substance to create the appearance of fullness in certain areas of the face. Lip fillers are especially popular, Dr. Critchlow says.

Get each day’s latest first thing in the morning.

Its an art, he says. Its sort of like sculpture  theres a real art to it when you combine both of them to get rid of lines to make the face look younger and fresher.

Other procedures, such as laser skin resurfacing, are available at the Vein & Esthetic Centre.

Cosmetic vein procedures can also help patients feel  and look  their best. Dr. Critchlow says he often sees patients seeking help with the appearance of veins on their legs.

Pat Vogt, 73, says she loves to stay active. She enjoys activities such as swimming and biking; she says they keep her body and mind sharp.

While swimming, Vogt says she sometimes felt conscious of spider veins visible on her legs. They bothered her while walking on the pool deck, she says. She decided to pursue treatment and continue participating in the activities she loved.

Its a cosmetic thing, but sometimes, a cosmetic thing makes you feel better about yourself, she says. You can get out there and continue to do what youve been doing. 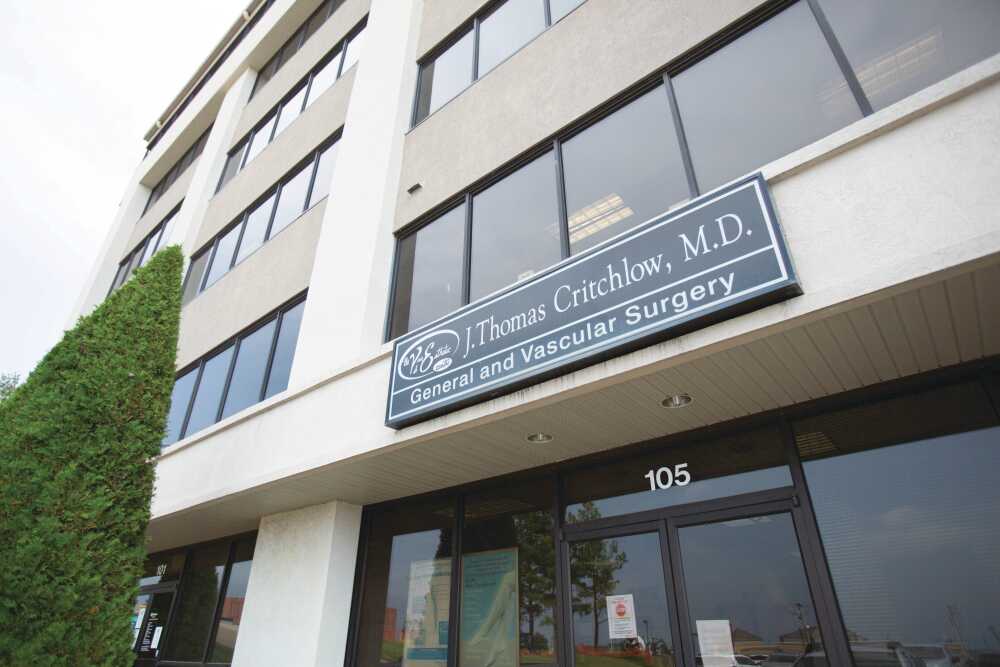 She says she chose to visit Dr. Critchlow at the Vein & Esthetic Centre based primarily on the friendliness of the staff and the extent of their experience. From her first interactions with the office, Vogt says she felt they were warm and welcoming, and the staff was interested in helping her.

You never feel like youre one of many or just a number, Vogt says.

It was also important to her to know the details of the procedure  she says Dr. Critchlow clearly explained the steps, possible complications and the healing process. The procedure itself was painless, she says.

Vogt received the procedure in early May, and says shes still able to enjoy all the athletic activities she loves during the healing time.

Please subscribe to our newsletter to get the latest news in your domain of interest. Don't forget to follow us on social networks!

The global “Blue Light Skincare Market” Report Deliver Comprehensive Analysis of the Market Structure Along with Forecast of the Various Segments and Sub-segment –...

Technology and Our Smile: How This Top Cosmetic Dentist Has Created a Completely Customizable Smile Makeover

Can Cara Change Everyone’s Opinion Of Her On Siesta Key?